Yes, TV Advertising is Back (and Better Than Ever)

Linear TV ad spend has been declining, but TV advertising as a whole is far from a dying art. In fact, it might be more effective than it’s ever been. It’s probably no surprise to learn that COVID-19 has been bad for TV advertising. Worldwide spending on broadcast TV ads dropped by around $34 billion last year, with advertisers cutting spending to safeguard their businesses through the pandemic. However, that doesn’t mean TV ads are dead; far from it.

First of all, linear TV is still a behemoth. A new survey from Advertiser Perceptions found most advertisers still see linear TV as the single most valuable video tactic for commercials, even with the growth of streaming services. But beyond that, the world of TV has opened up to include new opportunities for savvy marketers.

The growth of addressable TV

Addressable TV advertising has changed the game in many ways. It refers to the tactic of showing different ads to different households despite them watching the same program. By basing this on audience data, marketers can target households based on how relevant and impactful the ad is likely to be.

While not all consumers access TV in a way that allows for addressable ads, it’s thought that this could be used for around 66 million households. If done well, it can be extremely effective; one study found that return on investment for addressable ads in the consumer packaged goods sector was 9.4 times higher than the equivalent linear TV ads.

While this is still a minor aspect of TV advertising as a whole, it’s projected to take off in a big way in 2021. For example, eMarketer predicts that addressable ad spend will increase by 75% by 2022, up to a total of $3.6 billion. If advertisers can make good use of consumer data, this could be an extremely effective tactic to focus on.

While linear TV is still extremely popular, over-the-top (OTT) viewing has become huge in the past few years. The term refers mainly to streaming services like Netflix and Hulu - as well as online video sites like YouTube - that are now watched through TVs thanks to the growth of CTV. This has provided marketers with new opportunities to target audiences.

This is a growing market. Around 27% of consumers are expected to cancel their cable subscriptions in 2021, compared to 11% in 2020, and it looks like their preference is for free, ad-supported content. CTV advertising can be easily combined with addressable ads thanks to the amount of data that’s available online.

However, ad budgets are lagging behind in this area. Total CTV ad spend in 2020 was around $14 billion, which is roughly a tenth of the linear TV ad budget of $140 billion. This area has a lot of potential for advertisers if they can work out how best to utilize it.

None of this means that traditional TV should be counted out. COVID-19 certainly had a profound effect on linear TV ads, but the data currently points to this having been a temporary blip rather than a sign of an ongoing decline. Linear advertisers are bouncing back in 2021, and it looks like they’re not going anywhere.

While linear ad spend dropped significantly in March 2020 thanks to the pandemic, it rebounded to 2019 levels by December. From here, it’s expected to grow; US ad spend is predicted to increase from $60 billion in 2020 to over $68 billion in 2022.

Once again, it’s important to remember that linear TV is still enormous, and is easily integrable with CTV and OTT. While streaming services might overtake it in the future, traditional TV is still the biggest source of revenue for advertisers and will be for some time. 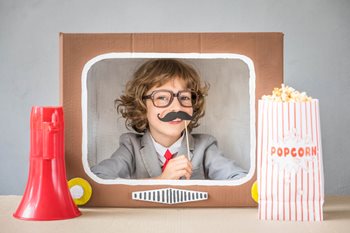 Everything You Need to Know About TV Advertising