How to Fire Someone (The Right Way)

No-one likes having to fire someone, but by remaining professional you can reduce the chance of any backlash. Here are some key dos and don'ts. Firing an employee is nobody's favorite part of the job, but unfortunately, every HR professional will experience this sooner or later at some point.

Whether it's terminating a worker who's been performing below expectations, dismissing someone for poor conduct such as harassment, or simply as an inevitable consequence of downsizing, it's a conversation that can be fraught with difficulties. Get it wrong and you could face an angry backlash from both the terminated employee and their former colleagues if they feel there’s been unfair treatment, or even open up the possibility of a lawsuit.

Here are a few key dos and don'ts to make sure that when these unpleasant situations arise, you're handling them as sensitively and professionally as possible.

Don't make it a surprise

A firing should never come out of the blue. Unless there's been serious and immediate misconduct - in which case, the employee will likely know exactly why they're being dismissed - a firing for cause should only come at the end of a clear disciplinary process. For instance, if there are performance-related reasons, there should have been a series of reviews and feedback sessions to make the employee aware of where they're failing and offering the opportunity to improve long before the final conversation begins. You should then have all this documentation on hand for the actual firing to back you up.

Being fired is never easy, and one of the few things that can make it worse is being treated impersonally. Being fired by email, letter or by phone is discourteous and immediately leaves a bad impression that can lead to a backlash. Ideally, you should fire someone face-to-face, while they're in the same room. Even being fired over video call, which as many employees have discovered in 2020 is increasingly common in remote working environments, is no substitute for being there in person.

Many line managers will think firing someone is a task best left to you as the HR professional, but this shouldn't mean they get to wash their hands of the process. It's important that their direct manager is present when you inform an employee of their firing. As well as ensuring line managers take on their share of the responsibility, having a more familiar face can help terminated employees keep their emotions in check. What's more, this can give you more liability cover as there'll be a witness.

Do keep the conversation concise

Firing conversations should be kept short and to the point. This isn't the same thing as being blunt or rude, but you should be clear and concise about what's happening and why. Don't start with small talk or get dragged into long discussions about the reasoning, as this can give personnel an opening to argue their case. Instead, lead with the headline - no dropping hints beforehand - and make sure you're talking in the past tense, as this gives the impression of finality, and that there’s no further discussion to be had.

It's understandable if employees become emotional during the conversation, but no matter how angry or upset they get, it's vital you remain calm. While you can - and should - show empathy, avoid clichéd phrases like "I know how you feel", stick to the facts, and refrain from physical contact. Also, be wary of apologies. While it can feel natural to say "I'm sorry", this can give the impression that it's you who bears responsibility for the firing, rather than the employee's actions. If you do have to say 'sorry', contain it in terms such as "I'm sorry that the situation has got to this point”.

Do talk to the team

Finally, it's vital you communicate effectively with the remaining team to avoid firings hurting morale. You shouldn't go into detail about the specific reasons for a termination, as this should be confidential, but do be clear about what's happened. Avoid badmouthing the employee on a personal level and make sure you crack down on any rumors or concerns - if someone was fired for cause, say so to avoid other people worrying about their own jobs. 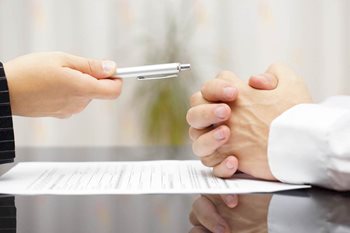 Delicately Handling Dismissal - What Not To Say 3 Ways Outplacement Services Can Give You an Edge in Recruitment