What are Snack Ads (And 3 Game-Changing Examples)

Snack ads are some of the best new tools marketers can use to engage their audiences. But what actually are they, and how can you use them? “For sale: baby shoes, never worn.” You’ve probably heard of this story, often attributed to Ernest Hemingway, as a prime example of how to create something with incredible impact in a short space. With just six words, the reader can imply the great loss and heartbreak of a parent expecting a child that never came.

Of course, this is far from the only example of a six-word story. People have been using the format for years, and produced funny, scary, moving and just downright enjoyable tales with this tiny word count. This is something marketers should be aware of, as it’s a skill that can be incredibly useful; particularly in an age of micro-content and users with short attention spans.

In fact, the same logic behind “For sale: baby shoes, never worn” also lies behind the concept of snack ads. Rather than six words, these typically come in the form of six-second videos designed to grab an audience’s attention without having them reaching for the “skip ad” button.

Mastering these can be the key to great marketing campaigns. While your target audience might be turned off by something as short as a minute, roughly six seconds will allow you to get your point across without making users resent your brand for getting between them and the content they actually want to see. What are snack adverts?

Snack ads can refer to anything bite-sized and designed to be viewed and absorbed in a matter of seconds, but the most common form is YouTube bumper ads. After years of unskippable 30 to 60-second ads at the start of their videos, YouTube started allowing users to skip straight to the content after roughly ten seconds, so advertisers had to change their game.

Recognizing this, Google now allows you to set up bumper ads in Google Ads. These sub-ten-second videos play before relevant YouTube content, removing the need for users to skip anything. This means you can get your entire message across, rather than creating a minute of ad content that users will only see 10% of.

This might sound far-fetched - after all, how can an ad be expected to get its message across in such a short period of time? - but there’s evidence that it works surprisingly well. Google tested 329 bumper ad campaigns over the course of a year, and found that around 90% resulted in a significant increase in ad recall.

It’s not just a YouTube thing, either. Fox has also committed to using six-second bumper ads on its online on-demand content, with its executive vice president of nonlinear revenue David Levy saying:

One of our biggest priorities at Fox Networks Group is figuring out the best way for a brand to reach a consumer that captures the right kind of attention and serves its precise KPIs.

This trend of snack ads comes from the ages-old battle between long-form and short-form content. Some argue that one works better than the other; however, it seems clearer as time goes on that the most effective marketing campaigns could involve either. It all depends on the context.

Arguments showing that the average human attention span has fallen to less than that of a goldfish have been debunked, with our attention largely being task-dependent. Reading a 5,000-word article that really grips us might be easy, while it can seem like much more of a chore to sit through 30 seconds of ad content before a YouTube video.

This latter example is where snackable content is the most useful. Video has been proven to be a great option for marketers, with users being able to recall 95% of information in a video compared to just 10% when reading it in text. Video also generates 1,200% as many shares on social media as text and images combined.

However, as much as it’s an effective medium, when it comes to ads, people just don’t want to pay attention for very long. One study found that around 89% of people pay attention to the first ten seconds of a video ad. By 30 seconds, this had dropped to just over 66%, and by a minute it had fallen to around 44%.

This isn’t technically a snack ad; it’s an example of a six-second short-form ad commissioned by Google to showcase what can be done with bumper ads and micro filmmaking. However, it’s a fantastic piece of content, very clearly providing the viewer with an important message about global warming despite having no dialogue to rely on.

Maud Deitch from Mother New York, who created the video, encourages marketers to “think of your story like a joke”. You have to make it all about the punchline, or in most cases the payoff or message you want people to walk away with from your short-form ad. That way, your video will be focused and clear to users.

When it comes to films, so often we know what to expect from them. This is especially true for long-running series, but this fact is rarely used in marketing. However, this bumper ad for Jason Bourne uses audience knowledge to its advantage, letting users fill in the gaps about what to expect in just six seconds.

The text reads “you know his name”, but the subtext is that you also know what you’re getting from a Jason Bourne movie; namely stylish action and excitement. This is reinforced by the chosen clips of a car chase, leaving users with the unmistakable impression of a film that will provide them with the thrills they’ve been looking for.

Arresting visuals are a key part of any snack ads, and this one has plenty of them. It’s hard not to pay attention to the slow-motion impact of a flaming boxing glove hitting someone in the face. However, this image also tells users a surprising amount about the product in question.

It’s an energy drink, and the visuals certainly get that across. Anyone who’s ever slapped themselves across the face to wake up will recognize the look of shock on the face of the video’s subject, while the fire and fighting imagery suggests action and energy. In just six seconds, the product has been made to look as appealing as possible.

Why are snack ads the future?

Snack ads are clearly a useful tool for marketers, but why exactly do they represent such a large aspect of the future of online branding? From attention spans to information retention, it increasingly seems that short-form ads are the best option for consumers, and therefore best for advertisers.

Let’s look at non-advertising videos as an example. In theory, these represent content that users choose to view, so you would be safe to assume they’d have a much longer attention span when it comes to this type of media. With that in mind, what do you think is the ideal length of a video in order to keep as many people engaged as possible?

It’s actually only two minutes. After this point, average user engagement drops off rapidly, from around 70% to just over 50% by the time the video hits the six-minute mark. It remains around this point until the video gets to 12 minutes long, at which point engagement again reduces to around 45%.

Remember, this is for content that people choose to watch. When it comes to ads, they’ll have a lot less patience. This is what Sumo found with its content marketing efforts; when the site published articles, only 20% of users finished reading them. The average visitor got just a quarter of the way down the page.

Clearly, shorter is better when it comes to user engagement. But are users able to follow ads when they come in such short chunks? Research suggests the answer is yes. For example, Twitter found a 15-second ad on social media is just as effective as a 30-second ad on TV for stimulating memory. What’s more, the first three seconds are so effective that they work just as well without sound.

In fact, users are becoming increasingly used to dealing with shorter content. The next generation has grown up using Snapchat, with 90% of all US 13-24 year olds using the platform. Ads on this platform can’t be longer than ten seconds, so users are very receptive to short, bite-sized content.

Users also prefer video ads over others. In fact, people want to see more videos than any other type of content in the future. It’s therefore important to listen to your audience and provide them with what they’re asking for, combining everything we’ve learned above into a bite-sized, snackable ad campaign.

Some brands are already ahead of the curve on this one, like Corona, which saw success with its six-second ‘splash jump’ ad targeted to a younger audience. It’s clear that snack ads are therefore the direction in which the industry is heading, making them a good investment for the future.

To make better decisions with your marketing strategy, you need to keep up to date with industry trends. To view more, click here. 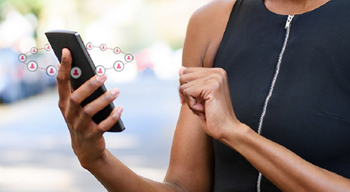 How Artificial Intelligence is Transforming Online Advertising in 2021