The greatest leaders have always been masters of communication. Here, you can find out what advice they have for you, in their own words. If you name any great leader, you’ll also be talking about a great communicator. The ability to get your points across clearly, inspire people with your words and argue your position successfully are all essential aspects of leadership, and if you’re struggling to convey information to your team then this might be something to work on.

Luckily, we have plenty of advice on hand from some of history’s greatest leaders. Here are some of the best available tips on how to talk to people, directly from the mouths of iconic leaders in history:

“If you have an important point to make, don't try to be subtle or clever. Use a pile driver. Hit the point once. Then come back and hit it again. Then hit it a third time - a tremendous whack.” - Winston Churchill

Churchill’s speeches formed an integral part of the Second World War, so it’s no surprise he’s renowned as a great communicator. A large part of that came from his direct style of speaking. While there are certainly times when subtlety is necessary, if the information you need to get across is especially important then you should be as direct as possible.

Beating around the bush will only serve to dilute the message, leaving listeners confused as to what they should take away from your speech. This is something to bear in mind when giving presentations; if there is a key point you want people to understand, make sure it comes across with the level of importance it deserves.

“Whatever words we utter should be chosen with care, for people will hear them and be influenced by them for good or ill.” - Buddha

The wisdom of the Buddha is famous around the world, and quotes like this show why. It might seem simple, but it’s advice that so many people either forget or ignore. If you find that your team misconstrues your instructions and frequently takes offense at what you say, it could be because you aren’t choosing your words carefully enough.

This is especially true when it comes to text-based communications, such as email. If you’re sending something to your team, you should be checking it over at least once before you send it. Make sure you’ve chosen your words carefully, so it can’t come across that you’re angry at someone when you’re not.

“He has a right to criticize, who has a heart to help.” - Abraham Lincoln

Lincoln had a lot of wisdom to share, and this quote sums up one of his philosophies perfectly. If you’re going to be critical of your colleagues’ efforts, you have to be willing to help out in order to fix mistakes and make sure the project is as good as it can possibly be. If you don’t, your criticism likely won’t be welcome.

However, there’s another layer to this quote. When you criticize someone, you should do so with the genuine aim of helping them improve. If you just want to tear them down, they’ll resent you and be less likely to listen. However, if they can see you’re invested in helping them, they’ll be much more receptive.

“Confession of errors is like a broom which sweeps away the dirt and leaves the surface brighter and clearer. I feel stronger for confession.” - Mahatma Gandhi

Everyone makes mistakes. However, some people feel like they can’t ever show weakness and admit they’ve done or said something wrong. Gandhi shows here why this is itself a mistake; after all, just because you don’t admit to an error doesn’t mean it goes away. And the longer it goes unnoticed, the more problems it can cause.

Coming clean when you’ve done something wrong is an important aspect of communication. Not only will it help you catch mistakes early, it will also help the rest of your team feel more comfortable owning up to their own mistakes. If you make it seem like you never do anything wrong, your colleagues will be too intimidated to admit an error.

“A good leader can engage in a debate frankly and thoroughly, knowing that at the end he and the other side must be closer, and thus emerge stronger. You don't have that idea when you are arrogant, superficial, and uninformed.” - Nelson Mandela

No matter how good you are at communication, you’re going to get into arguments and debates. Sometimes they can be avoided, but often they come down to a disagreement over how a project should be run. In this case, you need to make a decision, which means arguing your case.

However, this quote from Nelson Mandela should always be in your mind while doing so. The aim of these discussions should always be to come to a point of agreement, not to ‘win’. If you’re only concerned with getting your own opinion across and not what is best for your team or organization, your arguments will do more harm than good. An Employers Guide to Effective Communication in a Crisis 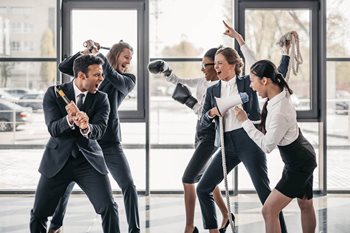 Why Your Team is Fighting and Why It's a Good Thing 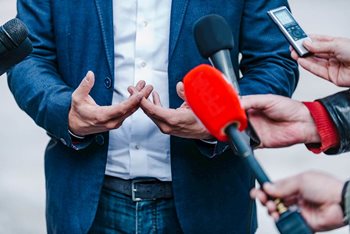