5 Tips for Streamlining Your Deployment Pipeline

Are bottlenecks slowing down your development cycle? Here are a few things you can do to streamline projects and get tools into production faster. Software development is always a complex process. With many moving parts and multiplying users and teams focusing on different areas, it's easy for the pipeline to get bottlenecked as the project progresses.

One common issue is changing requirements. In today's world, it's common for business units or other stakeholders to add new feature requirements or rethink a user interface midway through a build in response to changing market requirements, emerging technology or a whole host of other reasons.

But this can cause serious headaches for developers and may slow progress down to a crawl if they have to spend time retooling or even completely rewriting code they've already completed to respond to this.

Other issues that can hamper the workflow include competing demands from various groups that mean development teams are hit with more requests than they have the resource capacity to manage, or communication issues that pull developers in different directions.

However, with the right planning and processing in place, many of the causes of these bottlenecks can be managed and any issues dealt with before problems arise.

Here are five things to keep in mind to ensure your development cycles are as streamlined as possible:

The first step in unclogging these bottlenecks is to ensure you have a clear strategy for the entire process, and adopting an agile framework can help ensure that everyone involved in the process knows what they’re doing at all times and there are systems in place to prevent the sort of work build-up that often leads to bottlenecks.

There are a range of agile strategies to choose from, which may be well-suited to different things. If you commonly have issues with multiple requests overwhelming your team, for example, Kanban's WIP Limits philosophy can ensure you don't try and take on too much at once. Meanwhile, Scrum's sprints systems can help manage frequently changing requirements, as any new features or tools can be addressed at the end of each sprint, with teams free to concentrate on current requirements within every given sprint.

You don't have to fully embrace a single rigid framework, however. Many companies use hybrid systems that contain elements of multiple methodologies - such as Scrumban - that aim to take the most useful features of each.

Repeating manual processes throughout the development cycle, from code creation to testing, is one of the biggest causes of project slowdowns. This can not only have a negative effect on the time taken to complete projects, but can also reduce team morale and lead to more errors creeping in as individuals have to deal with many tedious operations.

Automation can alleviate many of these issues, and with technologies such as AI becoming more powerful than ever, firms can now hand off many more processes to these tools than in the past. Adding automation is a key step if you're looking to incorporate agile strategies and DevOps.

For example, build automation can undertake tasks such as compiling source files, compressing compiled files into the right formats, producing installers and creating or updating of database schema or data. The software build then happens automatically, instead of a developer having to manually invoke the compiler.

Continuous integration (CI) is a key part of any continuous delivery strategy, and helps ensure the pipeline flows smoothly at all times. This involves developers frequently adding any code they’re working on into a central depository. This should be done as often as possible - ideally multiple times a day - and results in a single location where the code of the entire dev team is collated.

Automation tools then verify each check-in, looking for any errors and conflicts in the various elements of the code. This then allows the team to quickly address any discrepancies or issues as quickly as possible, rather than having to wait for more in-depth, manually focus review later, which can slow down production.

This also allows for tighter cohesion between teams and ensures individuals are able to easily collaborate with each other, rather than working in isolation and only comparing features at the end of a cycle. Because any issues are resolved faster, it reduces the need to pause and fix any more major bugs later in the cycle.

Related to this, continuous testing also helps ensure the smooth flow of a project by removing the need for long, complex fixing and rewriting processes. By employing techniques such as test driven development, test requirements are created for each piece of code, before it’s even written. This should ensure every feature of a development is being designed from the ground up to pass key tests, instead of going back later to revise code that fails.

This is another area where automation can be hugely useful. Testing automation tools take much of the heavy lifting out of the hands of development teams. A DevTestOps approach replaces the siloed stages of a project, where testing is viewed as its own distinct step in the pipeline, with a more integrated strategy that embeds testing into every aspect of agile development.

5. Have an effective project manager

Even the most advanced automation and DevTestOps systems will still struggle to work effectively if the teams themselves are still getting overwhelmed with requests or questions from other teams that require them to stop what they're doing and refocus. This is why having the right personnel in place to intercept these requests and deal with other issues becomes essential.

The Scrum framework, for example, includes a Scrum Master, who will feature prominently in managing communications between various groups. This isn't a traditional project manager, but rather a facilitator who works to coordinate inputs from across the various stakeholders and prioritize and streamline the communication process.

So, if a project leader has an unreasonable request that hasn't been resourced for, it’ll be their job to deal with it before it ever reaches the development team, allowing these professionals to focus on their job. 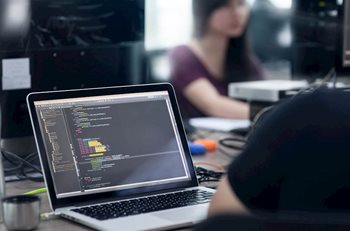 Implementing a DevOps Culture in the Enterprise How to Choose a Database for Your Mobile Apps How to Build Accessible Apps Fast with Low Code