Marketers and event professionals have had to pivot to virtual and hybrid events in the past couple of years. While some companies already have limited experience in incorporating digital experiences to their traditional in-person events even before the lockdowns, most have had to learn along the way. In fact, 73.6% of event organizers say they have become more proficient in technology as a result of the pandemic. This is vital as the majority of visitors (65%) and exhibitors (57%) expect digital event technologies will continue to play a role in the events industry as restrictions on movement and in-person gatherings wind down.

While event platforms play a significant role in helping events meet their objectives, you can also learn from successful events that have been held recently.

Here are four successful virtual and hybrid events and how they pulled it off.

Take your in-person events to the next level

Open the doors to greater audience engagement and accessibility with virtual and hybrid events.

When preparing for your next hybrid or digital event, taking inspiration from Apple events is a good place to start. They’re one of the few companies whose product launches are almost always covered by media outlets all over the world.

Apple knows that while their event needs to be successful for their live audience, both on-site and online, more customers will be able to see parts of their events through the news or in reviews by third-party publishers.

This is why the production value of one of their live virtual events is more like a feature-length film. Pay special attention to how they’ve virtualized their keynote addresses from before the pandemic compared to the past couple of years.

The more recent keynotes may have used more pre-recorded clips and company executives didn’t speak in front of a live on-site audience, but the event still felt on-brand and consistent with the special events they’re known for.

The Atlantic magazine annually hosts The Atlantic Festival, which features their work for the year. In 2019, the event drew in 3,000 in-person guests for its three-day duration.

On the other hand, The Atlantic Festival for 2020 had over 37,000 registrants for its four-day virtual event, exceeding their target of 15,000. The event had two types of tickets: one for The Atlantic subscribers and the other for the general public.

The publication had three goals for the event:

With an emphasis on audience engagement, the festival enabled attendees to interact with speakers and ask questions from them. The participants could interact with each other in private, one-on-one virtual rooms.

As a special intermission in the program, the cast of a Broadway musical performed a piece from their show.

The Atlantic deemed the 2020 festival so successful that they’re considering all future festivals to be hybrid events once limits to in-person gatherings are loosened.

Held in March 2021, Salesforce World Tour Sydney Reimagined was delivered for an entirely online audience with speakers and panel guests shot live in a single location. It had the environment and feeling of a traditional conference - as if you were sitting in an auditorium with other attendees.

Outside of the keynote presentations, the event also included breakout sessions throughout the day, which were also live streamed.

Furthermore, the conference featured a “battle of apps” competition among the exhibitors. The competing teams, all online, had to do three-minute live demos of their apps. The audience could then vote for their favorite app for a period of 24 hours after the competition.

Both The Atlantic Festival and Salesforce Reimagined conference are demonstrative of how you can recreate a live event experience in a digital venue. With the proper focus on audience engagement and empowered by the right virtual platform, you can maintain your event’s familiarity but also elevate the experience.

The National Speakers Association is a member-based community of professional public speakers. They hold regular events including one called the Winter Workshop which is primarily intended to be a networking event for their members.

If there’s any event that has a discerning audience, it has to be one like this, where its attendees are professional public speakers.

Usually held as an in-person event, their February 2021 workshop was a hybrid experience. Speakers, presenters, and member-participants were either on-site or online.

The unique offering of the 2021 Winter Workshop was that while it held the usual three-day event, the association also organized “warm-up sessions” weeks ahead of the main February workshop.

As a practical matter, the organizer wanted to space out the sessions so that the main event wouldn’t be taxing to participants. They also designed the warm-up sessions to get the speakers and attendees familiarized with the hybrid event platform.

The annual Winter Workshop is a key revenue-driver for the association in the form of ticket sales, product sales, and membership renewals. The warm-up sessions helped build hype leading into their successful 2021 Winter Workshop.

When organizing your next event, it’s important to clarify how it can bring value to your business or your organization’s work. Is it to raise awareness about your new products? Is it to impart knowledge to establish your organization as a thought leader? How does the event fit in your sales funnel?

Because virtualizing event experiences is still relatively new, all the ideas and technologies can be attractive to experiment with. Take inspiration from the successful events that have recently occurred but don’t unnecessarily burden your team that you need to replicate them.

Define what will make your event a success not simply to make it the talk of the town — although that would be nice too. Organize with intent. What’s important is to anchor your program and event offerings to measures that matter to your organization.

Hopin now supports virtual, hybrid, and in-person events all on one easy to use platform. Built for you to build any event, Hopin makes planning, producing, and reliving event experiences easier than ever. 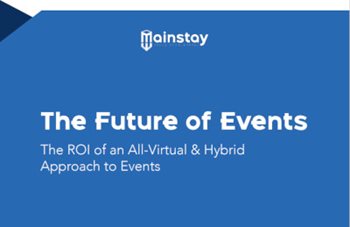 The Future of Events 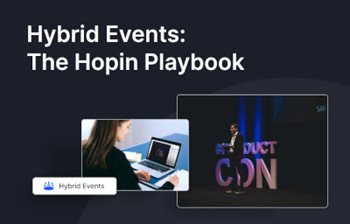 3 Common Hybrid Event Challenges (And How to Overcome Them)