The Secret to Obliterating Human Error

Human error has always been thought to be an inescapable part of business. However, considering how costly it can be, organizations should be looking to technology to eliminate it altogether. Human error is a huge problem in all areas of business. However, despite costing huge amounts of money each year, it’s often seen as an inevitability that can’t be wholly prevented, just negated with intelligent use of processes and training. This is no longer the case, and organizations around the world are moving into an era where human error is increasingly being eliminated.

The scale of the problem is bigger than you might think. For example, 29% of data loss is caused by human error, and this can be catastrophic. Running the wrong command on a database can lead to hundreds or even thousands of hours of lost work, which can then be impossible to get back.

It can be even more devastating when it comes to fraud. Phishing attacks, which require a person to accidentally give out their details, are responsible for 95% of all cybercrime, and cost the world over $4 trillion each year. Human error is also responsible for 92% of all cybersecurity incidents and 84% of all data breaches.

However, although the situation looks bleak, there’s a clear solution at hand. In our increasingly digital world, it’s now becoming more possible to remove humans from many processes altogether, or to use technology to assist them so your employees are much less likely to make costly mistakes.

The answer is automation

Larry Long, director of engineering at FNTS, is a big fan of automation. Writing for Forbes, he said: “People often have the best intentions in mind when they complete a task; however, they may bypass a process to complete work on time or eliminate a step to speed up a project and unknowingly put their company at risk.

“By moving specific processes out of human hands, methods are followed precisely, and steps are no longer skipped.”

An example would be the IT industry. Many of the tasks IT employees currently complete manually could be programmed into a piece of software and automated. This saves time - and therefore money - for the organizations using this strategy, and cuts down on the risk of human error.

Workflow templates can be used to automate all sorts of projects. They’re particularly useful to keep everything within budget and delivered on time, which is especially useful considering that a third of all projects go over deadline. AI can help with this, such as cutting down on time lost emailing stakeholders about a project’s progress by automatically doing this whenever a stage is complete.

Then there’s lost or forgotten work. Almost half of all knowledge workers have reported that this happens to them at least once a month. However, if the process of keeping track of these tasks is automated, this is much less likely to happen.

Automation can be a scary word, with images of jobs being lost as employees are replaced by machines. However, in most organizations it simply provides a way for you to better optimize your workforce, allowing them to spend more time being creative and innovative rather than having to spend much of their day keeping track of work and performing simple tasks that could easily be done by a program.

Your comment has been successfully submitted, it must be approved by our admin team before it is presented on the site.
02/10/2019 J.Newton
Automation sounds great but investment of time and money in researching , learning and implementing software can be daunting. Any recommendations for software to automate workflow? 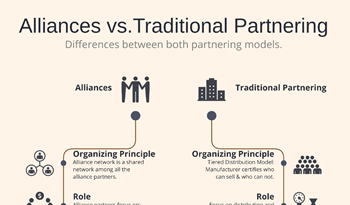 The Differences Between Alliances and Traditional Partnering Models