DevSecOps vs DevOps: 5 Crucial Differences You Need to Be Aware of

DevSecOps is an increasingly popular evolution of DevOps. But while they run on the same principles, there are a few key differences that IT teams must be aware of. DevOps has become a major focus for many businesses over the last few years. This strategy, which combines the work of development and operations teams into a single process, offers a range of advantages over the traditional waterfall approach to the software development life cycle (SDLC).

Some of these advantages include reduced costs, a quicker time to market, fewer errors and higher-quality software. However, while a DevOps strategy offers great potential for businesses, it does come with a few drawbacks.

One of the biggest of these is that, with such a focus on speed, issues such as ensuring the applications are secure may be given a lower priority. And in an environment where cyber threats are among the biggest risks any business can face, this can be a major problem.

Therefore, taking steps to ensure security is embedded in the process from an early stage is vital. And this has given rise to a new evolution of the DevOps methodology - DevSecOps.

What DevOps and DevSecOps have in common

Like its parent, DevSecOps is a way of working rather than a technology in itself, and the two terms have a lot of similarities. Ultimately, they both aim to streamline the SDLC and have a common way of going about this.

At the heart of both DevOps and DevSecOps is building a collaborative culture that aims to break down silos and bring expertise from different teams together with one purpose.

They also both focus on continuous integration and delivery, and this means they depend on a strong, constant monitoring of progress. This ensures any issues are identified and fixed as quickly as possible, therefore improving both the speed of delivery and the overall quality of the application.

5 areas where DevOps and DevSecOps differ

However, as the name implies, the key step that differentiates DevSecOps from DevOps is putting security squarely in the middle of the process. This isn't as straightforward as it may seem, as it means a DevSecOps process will have significant differences from a standard DevOps process. Therefore, understanding where these changes lie and how to approach them is a vital part of making DevSecOps work successfully.

The first key difference is in the purpose of the strategy. With DevOps, the primary goal is usually to eliminate communication gaps between teams in order to make the development and deployment of code faster.

While this is still an aim of DevSecOps, the main intention of this approach is to ensure security throughout the development process, so that the completed application won’t have any technical glitches or vulnerabilities that can be exploited.

This means there is no separation between development and security teams, and so security becomes everyone's responsibility. As such, it requires a shift in mindset from everyone involved. In a DevSecOps environment, all applications must be secured right from the start to avoid any vulnerabilities emerging later, rather than treating this as a distinct stage later in the process.

What does this focus on security mean in practice? For most DevSecOps strategies, it will involve taking a 'shift left' approach to security. In other words, this means moving security priorities to as early in the development cycle as possible.

To achieve this, it's vital that clear standards are in place for testing applications and these are shared throughout the DevSecOps team. It's crucial everyone involved in the process knows exactly when security and bugs testing is set to begin and what their individual responsibilities in this process are.

Threat modeling offers a more structured approach that allows IT teams to identify potential issues and vulnerabilities within their application. In a DevSecOps environment, this must be a high priority, with reviews taking place at all stages of the development pipeline. Making this an ongoing process throughout a project saves both time and money later on.

Any DevOps continuous integration and development process depends on constant feedback so that changes can be applied to prevent any waiting periods or bottlenecks holding up development. In DevSecOps, it's essential that full feedback is collated after every stage of code development and integration, with a focus on delivering clear warnings about any security vulnerabilities to the right people.

While both DevOps and DevSecOps embrace automation as a way of streamlining their processes and reducing the risk of errors, there are differences in how they approach this. With DevOps, the focus of automation is on how code is released to the next environment.

In a DevSecOps environment, automation is used to ensure that every time there’s a new development, it’s evaluated for security without the need for a separate, manual testing stage. This in turn generates reports on any vulnerability that occurs in the continuous development process, giving team members full visibility into what must be done to ensure security is never compromised. 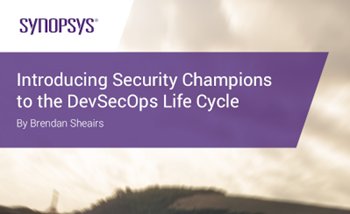 10 IT Experts Give Their Views on Improving DevSecOps