Despite commanding high salaries, data scientists are often disaffected in their roles. We dig into why this is, and what you can do about it. It’s official: data science is the sexiest job of the 21st century. It’s certainly becoming essential for a lot of major companies, and businesses that neglect it are increasingly finding themselves left behind. As a result, data scientists are able to command average salaries of around $117,000 per year. Yet despite this, organizations are finding it hard to retain their top talent.

A Stack Overflow survey found that almost one in five data scientists are actively looking for a new job. This is a surprising statistic at face value, but when looked at in detail the reasons become clear. Despite being a very in-demand role, data scientists often find themselves stuck at firms that aren’t meeting their needs or ambitions.

If you’re finding your data science team is disaffected and has one foot out of the door, you might want to evaluate some aspects of how it’s structured within the business. Here are some of the reasons data scientists might be looking to leave their jobs, and what you can do about them:

1. You’re not challenging them

Data scientists are highly qualified, often with a masters or PhD-level education. They will have studied for years to get where they are, and if your company provides them with work that’s simple and boring it can feel like they’ve taken a huge step down. You need to make sure you’re making use of their skills and providing them with a sufficient challenge.

Lukas Genever, recruiter for technology specialists Churchill Frank, recommends keeping up with the latest technology as much as possible. Machine learning and artificial intelligence are both areas that are becoming increasingly useful for the business world, and will provide your data scientists with a challenge that will also help deliver business success.

2. You don’t have the right infrastructure in place

Data might not seem like something that needs an infrastructure, but there are a lot of elements to it that need factoring in. Some have described a hierarchy of needs that companies must implement from the bottom up in order to get to the right stage in their data science endeavors. Failing to do so can leave your data scientists stuck.

Without the right data infrastructure, it becomes difficult to get any intricate projects off the ground. In AI, this is often referred to as the ‘cold start problem’, whereby data scientists are unable to create a useful program due to the dearth of supporting infrastructure and collected data. If this occurs, it’s easy for professionals to become dissatisfied with their jobs.

3. Their tasks are mind-numbing

Most data scientists would like to be working on exciting new technology like machine learning, but that isn’t the reality for the most part. On average, a staggering 80% of these professionals’ time is spent cleaning and organizing information, which is menial, boring and ultimately a waste of their talent.

This is a problem that can be solved by your data science team, using AI and machine learning. There are plenty of resources out there showing how software can be used to perform the menial tasks of sorting data, which will leave your team free to get into the meat of analyzing it and creating models.

4. You’re not ready for data science

The last thing any data scientist wants to wade into is the world of corporate politics. Yet this is exactly what many of them are forced to do from the start, due to fundamental misunderstandings about what exactly the field is. In many cases, businesses create data science departments simply because it’s the next big thing, without thinking through how they’ll fit into the company.

This can be incredibly frustrating to data scientists, and often brings the above three problems with it as well. Decision makers expect data scientists to change the world, but it’s hard to do that with no infrastructure, leading to the aforementioned mind-numbing tasks of sorting and cleaning information. You need to be realistic about what data scientists can bring to the table, and not set expectations too high. 6 Terrifying Big Data Challenges (and How CDOs Can Solve Them) 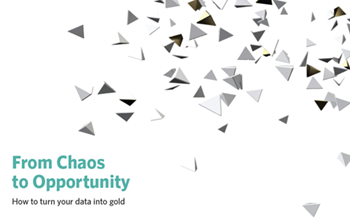 From Chaos to Opportunity: How to Turn Your Data into Gold